Yehezkel Ben-Ari and Neurochlore team demonstrate for the first time that in a naive animal, cortical and neuronal volume are not impacted by labor and birth. In contrast, in an animal model of autism, the cortex and neurons are larger than the day before, indicating a neuronal growth during labor and birth. Bumetanide, which reduces the autistic syndrome, reduces this growth. Thus autism is generated in utero, the pathological mechanism impacts the birth modifying the brain of the newborn. These observations confirm the importance of birth as a critical period and validate our therapeutic approach based on bumetanide to restore inhibition.

Parturition and birth are among the most complex biological processes in mammals, with electrical, immune and microbiota changes and that must intervene quickly. Yet, despite its fundamental and clinical importance, we do not know how the brain prepares for birth, and if and how this process is impacted in autism, thus affecting the first contacts between mother and child. Using a brain imaging technique called iDISCO to visualize it in 3D, we compared the brains before and after birth, in naive rats and in an animal model of autism. We also reconstructed cortical neurons to determine if they undergo changes during this period.

In naive rats, brain volume and size of neurons are similar before and after birth. These results are in agreement with observations made on premature babies: the brain does not grow during birth, which probably exerts a protective role during a vulnerable period.

In an animal model of autism, at birth, the cortical volumes and neurons are larger than the day before, suggesting a paradoxical growth during this period. Bumetanide, the effectiveness of which has been shown to reduce the autistic syndrome in humans and animals, abolishes this aberrant growth. It is proposed that the protective mechanism that prepares the brain at birth is impacted in the embryo of the future autistic child making it more vulnerable. This work shows the impact of the intrauterine pathogenesis process on birth and illustrates the importance of this period in autism. 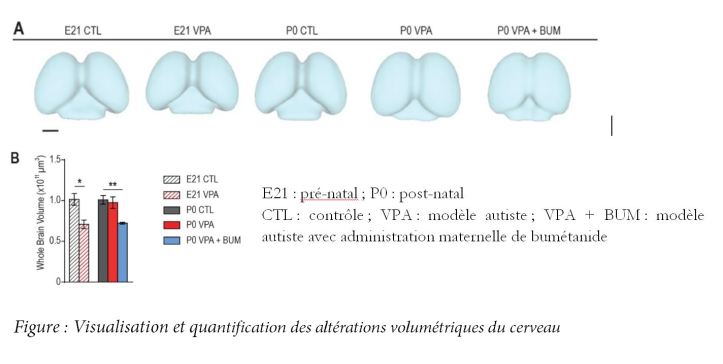 Conclusions: This work demonstrates for the first time the intrauterine event that generates autism and impacts labour and birth. It confirms the concept of Neuroarcheology, according to which many neurological and psychiatric diseases are due to deviations in brain maturation produced in utero and / or during birth and to neurons that have not matured because of these events. The new therapies will be based on agents such as bumetanide that selectively block the activity of these neurons performing selective pharmaceutical surgery.

Perspectives: We plan to build 3D maps of the brain in various neurological and psychiatric diseases, particularly in relation to prematurity or intrauterine inflammation, which increases the incidence of autism. We will also continue clinical trials of other developmental diseases based on the same concept of Neuroarcheology.

Early Alterations in a Mouse Model of Rett Syndrome : The GABA Developmental Shift is Abolished at Birth
Scientific Reports, 2019 June 25

Maturation of GABAergic Transmission in Cerebellar Purkinje Cells Is Sex Dependent and Altered in the Valproate Model of Autism
Frontiers in Cellular Neuroscience, July 30th 2018

Term or Preterm Cesarean Section Delivery Does Not Lead to Long-term Detrimental Consequences in Mice
Cerebral Cortex, May 16th 2018

On sale in bookstore